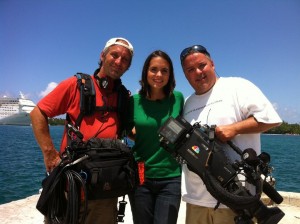 Right to left: Me, Lilia Luciano and the always convivial Dwaine Scott.

“You have a really cool job, it must be very interesting”.

I hear that a lot. It’s always from someone that isn’t in the television/video industry, and  especially from people that have an office job or that go to the same place everyday. Often times, I am meeting people on the best day of their life or the worst day of their life. But what I do-shooting and doing audio-seems much more interesting to them than their job. A recent conversation with NBC cameraman extraordinaire Dwaine Scott shed a little light on it in a way I had not really paid much thought to.

When we (camera and sound) are out in the field “we represent EVERY cameraman and sound-man in the world” said Dwaine. “Because most of the time, we are the one and only time someone outside of the business meets and interacts with us, and their entire impression of TV is based on how we act, and perform our job”.

Dwaine’s right. First impressions only happen once. Whatever the situation may be, when we leave, the people we’ve been around most likely will take from that day as how every camera crew is, and will relate that experience to their friends and family. And many times, that six degree separation is how those people will form their opinion of cameramen and sound techs…assuming (incorrectly) that we all act and perform our jobs the same way.

If we go in with a surly look on our face, speaking in short, brusque tones and sentences, tossing gear around haphazardly, and being generally pissed off, folks assume we ALL are that way. And if we do a crappy job, they assume we all do a crappy job.

No wonder we get portrayed on television (of all places) as dressed like slobs, vultures, jackasses, and as morons incapable of thnking for ourselves. Nothing drives that home like the 1989 movie “Everybody’s Baby: The Rescue of Jessica McClure”. Many of you older guys remember the story-little girl in Texas falls down a well. In real life, the 1st cameraman on the scene was then Midland Texas cameraman (and great guy and friend of mine) Phil Huber. Phil arrived shortly after getting the scanner call, and when he got there, he suggested dropping his shotgun mic into the well to see if they could hear Jessica. Phil did this on his own, and offered up anything and everything he could to help, in addition to becoming the pool camera for that event. We have all seen how that event turned out, through Phil’s eyes. However when the movie version came out, “cameraman” was reduced to being told to give them the mic and cable, and of course cameraman says “I dunno, if anything happens to that mic I’ll get in trouble”, and the rescue person bitches him out. It was an entirely inaccurate (and quite unfair) portrayal of what really happened…because somewhere, someone writing a script thought “hey this is what a cameraman would say/do”. Just so you all know, if Phil could have crawled down that well, he would have ditched the gear in less than 2 seconds and done it.

Are we accurately representing ourselves in public? Not always. That would be near impossible. Some days we just are off game, off message, just plain off. Sometimes circumstance means we have to get in and out as fast as possible. But we have to try, and try harder. Cause we’re representing.

From the desk clerk at the hotel, to the waitress in the diner, baggage handlers at the airport, the TSA agents (yes even them), the maid that is trying to clean the room with 14 cases of gear stacked up, to the subject of our interview…they all form their opinion of us from that 1st meeting. And rarely can it be changed much.

When we go in the field, we already have a tough job. We shouldn’t make it tougher on the next guy, by making ourselves…and each other…look bad. Our profession has enough going against it already…we go where tragedy strikes, and have to talk to folks enduring horrible situations, and interrupt them to ask them questions (don’t get me started on the “how do you feel?” question, that’s a whole ‘nother blog). The last thing we should be doing is walking up looking like we just cut the grass. Or acting as if we are owed an interview because “we’re the media!”.  Or doing a half assed job.

Everytime we go out, we are the television industry to most people. Both in the technical sense, and in the personality sense. It doesn’t matter what type of TV or video we are doing…news, sports, reality, corporate….we are the industry. We should act how we see ourselves…professional, courteous, friendly, and enjoying our job that is like no other one. We’re on the front row of life many times, and get to do and see some remarkable events unfold.

How do you want to be represented?